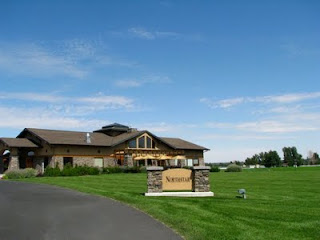 I just returned from a visit to Walla Walla AVA in the southeast corner of Washington. I have some family there so I have sampled Walla Walla wines before, e.g., L'Ecole 41, Cougar Crest, etc. But I wanted to visit some new tasting rooms. I ended up visiting Northstar (pictured above), Va Piano and Amavi Cellars. (I went by some others but they were closed, one of which was K Vintners--I was told by some locals that Charles Smith marches to the beat of his own drum, which in this case meant "doesn't hold conventional hours for public tastings.") Walla Walla is approximately the same latitude as Bordeaux as 2007, which explains that three out of the four most common grapes grown (by planted area) are Bordeaux varietals:

Some white grapes are grown, e.g., Chardonnary, Viognier, Riesling; and some growers in Walla Walla are starting to break out of the Bordeaux paradigm and are planting other red varietals. But red grapes dominate this AVA.

During my visit to the three tasting rooms I tasted three whites--a Sauvingnon Blanc blend, a Viognier blend and a late harvest Semillon. I found the white blends to be average; the late harvest Semillon was better, but still doesn't compare to a $25 half bottle of Sauternes. The rest of the reds were almost all blends; except for one 100% Syrah at Northstar. Without exception I found the reds to be very well made. None of the wines showed the slightest hint of being off balanced; all had a seamless transition from the attack to the finish. All were incredibly polished. In general they were fruity; and all received some amount of oak treatment--some more than others, but even for someone with old-world preferences like me none of the wines had an offensive amount of oak. To me these wines tasted like they were made by very skilled people with state of the art technology. Although I personally prefer something from the south of France to these reds, I can see why people would enjoy these wines. They're seductive. I look forward to going back soon to visit more wineries... oh yeah, and family too!

Revisiting the Reliability of Wine Ratings

I really don't think that people should over-think wine, but occasionally I temporarily stop enjoying wines to think about it. Lately I've been thinking about wine ratings--their reliability, etc.--in light of some ink that has recently been spilled (esp. see here and here). On the one hand, wine ratings are important—they are clearly a desiderata of producers, once a year the major print publications and even minor businesses herald their Top 10 or Top 100 wines and we readers consume them. On the other hand, almost everyone would acknowledge that our impressions of a wine can vary significantly from time to time because of a cluster of internal (e.g., palate fatigue, mood, etc.) and external (e.g., bottle variation, etc.) conditions. Note that in most domains a difference is statistically significant if there is a ≥ 5% change; but on the 100 point Parker scale, wines are automatically attributed 50 points, so the 100 point scale is really a 50 point scale. This means that statistically significant variation on the 100 point scale is ≥ 2.5. I doubt that there are many—if any—people who would doubt that their ratings of the same wine never vary ≥ 2.5 on different occasions. Once consumers (fully) realize that variation between 0 to 2.5 isn’t significant on the 100 point scale, consumers will place less importance in a rating, especially a rating just below the boundary of a multiple of 10, e.g., 89, and a rating just above the boundary of the next multiple of 10, e.g., 90. A wine that scored 90 on one occasion will almost certainly receive a different score on another occasion for one reason or another. I would argue that many consumers have fully realized this. But many critics have not acknowledge this either because they mistakenly believe that their tasting and evaluation abilities are so precise that they would never attribute a score ≥ 2.5 to the same wine on separate occasions; or they mistakenly believe that their professional stature would suffer if they publicly acknowledge this.

In light of typical variation in a wine rating on the 100 point scale, purchasing wines on the basis of a single rating, even of a professional critic (no one shall be named), is… well, irrational. So what should consumers use to guide our purchases? I have two suggestions—neither of which are infallible, but are more reliable than using a single score from a professional critic. First, you can stick with ratings and use the average from multiple ratings provided by professionals, non-professionals or some combination thereof. How many ratings are sufficient, you ask? It’s unclear, but 6 or 7 is a standard range of series to eliminate bias. One popular source for ratings that automatically calculates an average (as well as the median) is CellarTracker! (If you want to a more reliable average rating, you can drop the high and low score, etc.) Second, you can forego ratings altogether and use good old-fashioned word of mouth. That is, find a trustworthy friend who reliably recommends wines that you enjoy. My friend is a clerk at my local wine shop; and her recommendations are reliable even in the face of contrary evidence, e.g., a $10 price tag, etc. One might argue that the scores and tasting notes of a single professional wine critic can be as reliable as the recommendations of your trustworthy friend. But I would argue that because I have more access to my trustworthy friend at the local wine shop, and therefore access to more information, her recommendations are more reliable than those of the professional critic to whom I have no personal acess.
Posted by Sean Millard at 7:12 PM No comments: 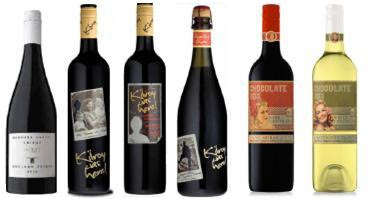 Picture from: http://www.prlog.org/
Last night’s tasting at the Wine Warehouse featured twelve wines from Rocland Estate Rocland is a large facility in the Barossa Valley (map) that has the crushing capacity of 7000 tons annually. In addition to producing their own wines they offer custom wine making services to private clients who, for example, can elect to use their own winemaker or have one provided by Rocland. Their estate bottlings have been well-received by big American critics from Wine Spectator to Parker. Of the twelve wines featured, there were four whites, and (unsurprisingly) six of the remaining seven reds contained some amount of Shiraz. All wines featured at the tasting except one were sub-$20 (the one other was $25). I found almost all of the wines to be well made & in the mid- to upper-80s scoring range, making them good values. And all reds seemed to be medium-bodied, have a relatively smooth mouth-feel, opaque dark brick red color and have a nose of mild mushroom/earth & clay/saline (think playdough); there was slight variation in flavors (see below). Although I didn’t find that any wines clearly stood out as significantly better than any other, below is a good sample from the tasting. (All prices shown are only for the Wine Warehouse. And, yes, the names are gimmicky.)

6. Chocolate Box GSM Red Blend ’07 (Grenache, Shiraz, Mouvedre): same nose as the other reds but with the addition of 5 spice. Dark prune, balanced, medium bodied.
7. Kilroy Was Here Sparkling Shiraz '07 (100% Shiraz): not too bitter/dry, not too sweet. Nice. $20. TWG: 87
Leave a comment: let me know what you think of Rocland wines.
Posted by Sean Millard at 7:56 AM 1 comment: 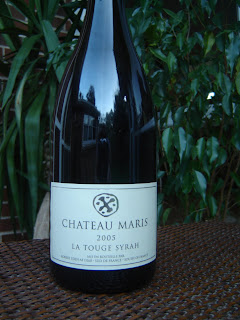 During this recession people are eating out less often and drinking more value wines. I'm no different. So when I was browsing the selection at my local merchant the staff brought a French Syrah to my attention priced at $9.99. (Based on Wine-Searcher here this wine is at least twice the price anywhere else.) My first reaction was: how good can it be for $10? Then I also remembered that my (tiny) cellar is Syrah-heavy right now. But when the staff described it to me it sounded like my kind of wine: Syrah from the Languedoc, shows garrigue, etc. Although I was skeptical, I decided to give it a try. I was pleasantly surprised. Here are my notes:
2005 Chateau Maris Minervois La Touge (France, Languedoc, Syrah)
Nose: candied black cherry, black currant.
Taste: black cherry, garrigue, black currant.
Overall: medium bodied, balanced, great right out of the bottle--no decanting necessary. Would definitely pair well with roasted fall vegetables, pot roast, etc.
Rating: 90
This is a Syrah that I'd enjoy anytime--recession or not.
Posted by Sean Millard at 2:28 PM No comments: